As part of East End Prep’s mission, our goal is that 100% of our students will be proficient or advanced in all subjects before entering high school. We will continue to improve our practices every year to better serve our students every year until our goals are achieved.

We are proud of our scholars’ achievements and we know they are capable of performing with the top schools in the state. This year we are laser focused on building a warm-demanding student culture with high academic expectations to help our scholars reach their fullest potential. 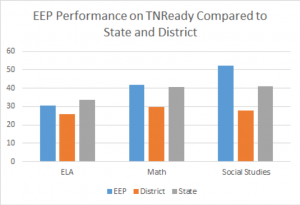 On Thursday, October 25th, the entire East End Prep community, along with board members and TN Commissioner of Schools Dr. McQueen witnessed Kindergarten teacher Shelly Gaughan win the Milken Educator Award and a $25,000 gift. Gaughan is one of 40 national Milken Educator Award 2018-19 winners, which is one of the most prestigious awards in teaching,  meant to recognize excellence in teaching across the country.